With the increase of food waste in urban areas, high-throughput in-vessel composters could be key to closing the loop between food production and food waste. These composters transform food waste into compost in as little as 24 hours, and the r 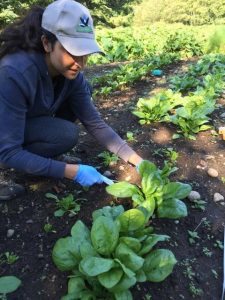 esulting compost is ready to be used for further food production. With the novelty of this technology comes a range of questions that this research project will touch upon, including the effects of compost that matures in the soil as opposed to in a composter on nutrient availability, greenhouse gases and crop productivity.

An experimental trial has been set up at the University of British Columbia’s farm (UBC farm) to determine the effects of Recycling Alternative (RA) compost made from food waste in high-throughput in-vessel (HTI) composters on soil properties and crop productivity. Five different treatments and four replicates have been randomly set up within the trial and spinach and beets have been planted to test for crop productivity. The treatments include: 1. RA compost only; 2. A mixture of RA compost and blood meal; 3. RA compost and compost that is normally used by the UBC farm; 4. UBC farm compost; and 5. a control with no soil amendment.

Baseline soil samples have been taken to determine the initial soil properties (bulk density, texture, N, P and K concentrations and ammonium and nitrate levels within the soil), and greenhouse gases (GHGs) have been measured using a Picarro Cavity Ring Down Spectrometer to measure the initial concentrations of CO2, CH4 and N2O within the different plots. During the growing season GHGs were measured weekly and soil samples were taken bi-monthly to measure ammonium and nitrate concentrations within the topsoil. Incubations were also performed to determine the differences in microbial communities between the different treatments. At the end of the growing season, end line properties similar to the baseline ones were measured, and the spinach and beets yields were measured to compare crop productivity between the different treatments.