Manure management has important consequences on nutrient cycling and greenhouse gas emissions (GHG) from agricultural systems. The Lower Fraser Valley (LFV) in British Columbia (BC) is home to many poultry farms that generate excess manures that must be applied on neighboring farms, and there are many horse farms in the greater Vancouver area that also produce excess manures. Because of limited storage capacity, applying manures in the fall is common to ensure farmers can store manures produced during the winter until spring. However, the cool and wet BC winters could result in significant nutrient losses from manures applied in the fall.

The main objective of this project is to quantify changes in nutrient availability and greenhouse gas (GHG) emissions from soils amended with chicken and horse manures in the fall. These two manures have contrasting nutrient content – chicken has a high nitrogen (N) and low carbon (C) to N ratios (C:N) whereas horse has low N and high C:N. This will affect decomposition rates as well as nutrient cycling in soils, both of which should be faster in soils amended with chicken manure. This experiment will be coupled with a subsequent lab manure incubation to measure changes in nutrient availability and GHG emissions in pure manures monitored under controlled conditions.

Experimental setup: A total of eight 5m x 5m plots at the UBC farm were amended with horse or chicken manure in October 2015 (four plots for each manure). Manures were applied to the soil surface to provide roughly 50 kg N ha-1 of plant-available N, and a rye-clover cover crop was seeded at the same time as manure application. The N application rate is equivalent to the N uptake expected for a cover crop planted in October in this region, and resulted in twice as much total N being applied with horse (200 kg N ha-1) vs. chicken (100 kg N ha-1) manure because N in horse manure is much less available to plants. 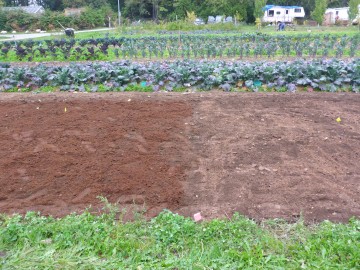 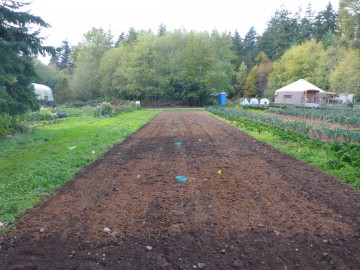 Data Collection: Prior to the addition of manures, ion exchange resins were installed below the plow layer (30cm) and these will be recovered in the spring to measure cumulative leaching during the wet season. Soils are sampled every 6 weeks and analyzed for extractable N, total C and N, and potential net mineralization. GHG emissions – carbon dioxide (CO2), nitrous oxide (N2O), methane (CH4) – are quantified on a weekly basis, using cavity ring down spectroscopy. We will monitor changes in soil nutrient cycling as well as GHG emissions until cover crops are terminated in April 2016, at which time we will also measure cover crop biomass as well as the proportion of rye vs. clover to determine if manure type influences legume dominance in cereal-legume mix.