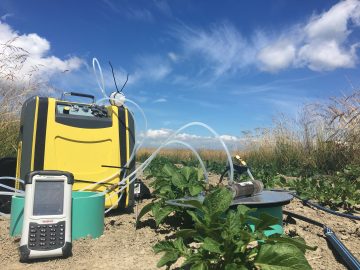 Soils in the Delta region are very fertile and productive soils; however, due to intensive agricultural practices such as tillage combined with the heavy rainfall occurring in the Fall and Winter, they are subject to degradation in the form of: loss of soil structure, compaction, and loss of soil organic matter. In order to remedy these effects, the Delta Farmland and Wildlife Trust started the Grassland Set-Aside (GLSA) Stewardship program in 1994.  Farmers in the program are offered a cost share incentive to convert their agricultural land from production to a grassland seed mixture of grass and legume plants for up to four years.  The GLSAs provide benefits of increased wildlife habitat, a protective vegetative cover of soil, and increased soil quality through organic matter inputs and soil structure improvement.

The purpose of our study are to evaluate the effects of 2 and 3-year GLSAs on nitrogen cycling and soil quality indicators in the growing seasons following GLSA conversion to cropping.  Our objectives are:

Since 1993, the Grassland Set-Aside (GLSA) Stewardship Program has incentivized farmers in the western Fraser River delta, British Columbia, Canada to plant a grass-legume mixture on active cropland and leave it fallow for 1-4 years to improve soil quality and provide wildlife habitat. Benefits to wildlife are well documented, but not well understood for soil quality. Study objectives were to quantify the effects of 2- and 3-year GLSAs on plant available nitrogen (N), crop production, soil quality, and greenhouse gas emissions. A field experiment was established in 2017 on a productive and unproductive field with fertilizer treatments (0 and 80-kg N ha-1) compared across GLSA treatments (i) AC – GLSA biomass removed and (ii) 2G – 2-year-old GLSA biomass was incorporated, and seeded with beans. In 2018, fertilizer treatments (0 and 100-kg N ha-1) were compared across the same GLSA treatments and (iii) 3G – 3-year-old GLSA biomass was incorporated, and seeded with potatoes. Active carbon (POXC) and aggregate stability (MWD) were measured 3 times per growing season, plant available nitrogen (PAN) was sampled every 2 weeks from May-September, and carbon dioxide, methane, and nitrous oxide were measured weekly from May-September and every 3 weeks from OctoberApril. MWD increased in 2G and 3G in the year of incorporation relative to AC and POXC increased for 3G relative to AC and 2G. Average seasonal PAN did not differ across treatments but was higher earlier in the season for 2G. Bean yields were greater in 2G compared to AC in the productive field, but otherwise crop yields did not respond to GLSA. N content of bean crops did not differ between treatments, was higher for 3G compared to AC in the unproductive field. 2G increased carbon dioxide emissions in 2018, but 3G only increased emissions in the 2018 production season. Nitrous oxide emissions treatments were higher in 2G treatments across all seasons, but lower in 3G treatments in the 2018 production season. Results suggest 2- and 3-year GLSAs do not increase average PAN to subsequent crops, but increase PAN earlier in the season, and increase crop yield and quality depending on subsequent crops.

The following (listed alphabetically) have assisted with this project: